The Washington Declaration on Intellectual Property and the Public Interest

The multi-stakeholder Global Congress, convened in Washington, DC on 25-27 August 2011, issued The Washington Declaration on Intellectual Property and the Public Interest. A powerful statement for the public welfare purposes, such as education and health, that all legal protection of immaterial creations and inventions serves. Read, discuss and sign the Declaration here. Point to it. Make it come alive in your daily policy work.

Copyright and patents have turned from obscure specialists‘ niches to front-page news in only 15 years. This turn coincides with the rise of the Internet and that of civil society and a global, post-colonial (more correctly: neo-colonial) perspective on our planet. The Great Conversation over the Internet (WSIS, IGF) has firmly established multi-stakeholder participation in public policy making. Likewise, the requirement for research-based data and evidence in policy making is now widely recognized (recently in the UK’s Hargreaves Review of IP). Those years have seen a maximization of the controls over immaterial property. They have also seen the formation of a broad movement of academics, librarians, educators, people from consumer protection, human rights, development, free software and free culture whose stake is in the public welfare side of culture and innovation. The movement strives to re-adjust the system to maximize the wealth created by access and openness for all, rather than maximizing the shareholder value of the few. The WIPO Development Agenda and the upcoming treaty on copyright exceptions for visually impaired persons, preventing software patentability in Europe and dismantling the secret ACTA process are among the highlights of that movement. Yet often it finds itself in a reactive position.

When over 180 experts from 32 countries came together in Washington, the aim was to formulate a positive agenda. Building on the 1993 Bellagio Declaration, their debate led to the drafting of The Washington Declaration on Intellectual Property and the Public Interest. See also the wealth of scholarship collected in the „libraries“ accompanying each of the conference’s session. From the wealth of principles and measures proposed in the Declaration, I want to highlight only a few: Transparency, openness and participation in policy making; valuing openness and the public domain; introducing binding mandatory minimum limitations and exceptions; re-introducing a registration requirement in copyright; supporting non-patent-based incentive models, such as prizes; requiring greater transparency, accountability, internal democracy and public oversight on the part of collective rights management organizations; ensuring that enforcement measures do not prevent access to essential goods and services such as the Internet; introducing effective measures for countervailing abuses of copyrights and patents and expanding systematic data collection and methodologically sound research to provide a basis for rational policy making in the digital knowledge environment. 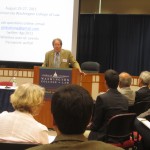 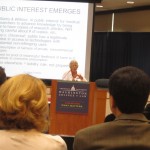 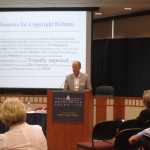 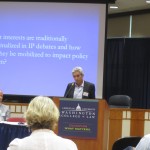 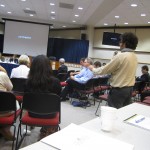